THE SONGS OF BARON SAMEDI 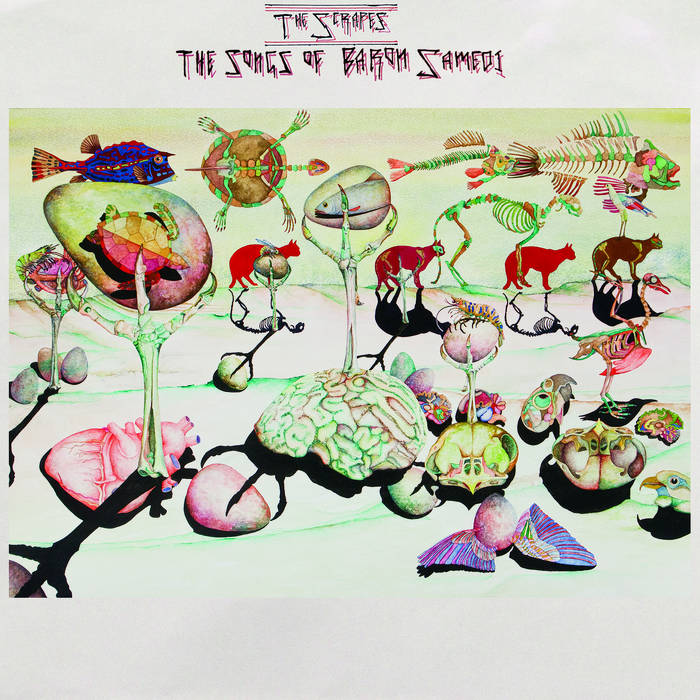 This is music that marches to the beat of its own internal rhythm, sparked by loops and subtle changes in delay, causing dense polyrhythms to ripple over drone-based harmonies. The Scrapes are characterised by their own personal musical backgrounds, a meeting of a rock n’ roll guitarist obsessed with the darker sounds of classic rock music, and an avant-garde classical violinist searching for a new musical language. This is a heady brew, firing off sparks in many directions through a complex telepathy that sometimes tears chunks off the glacial moods of the music, propelling it in schizophrenic directions of angular noise or intensely intoxicated balladry.
Ultimately intuitive, but born of a deep knowledge of tradition and a subversive philosophical leaning, The Scrapes are without a doubt a one-of-a-kind entity on the global music stage. Formed in Brisbane Australia in 2009, The Scrapes are a duo of orchestral, dense rockabilly guitar (Ryan Potter) and scraping, emotive electric violin (Adam Cadell). To date they have released two full length albums Electric Mourning Blues (2010) and Kali Yuga Sunrise (2011), both released in partnership with US label All Is Number Records. Throughout 2012 and 2013 Adam and Ryan lived abroad (Ghana and Turkey respectively), and returned to Australia in 2014 with new sounds and instruments to add to the Scrapes’ strange brew. The Songs of Baron Samedi, is a project begun before both artists began living in vastly different corners of the globe. This new album, intended for a 2015 release, promises to break more rules and bend more minds than ever before. Inspired by Adam’s experiences living in West Africa, the title Baron Samedi hints at the fabled voodoo “guardian of the grave.” Like so much Scrapes music, it is largely improvised, consisting of small pre-composed motifs from time to time that anchor our sprawling trips into new sonic spaces. This new instrumental music like you’ve never heard before.
"Hugely enjoyable, highly original AND psychically useful is the music of Australian duo The Scrapes, whose fiery epic guitar and abandoned fiddle pieces evoke images of lost lands inundated by the oceans, lost Iberian & Armorican sea peoples and lost times from beyond the beyond. Mostly, violinist Adam Cadell conjures up a fabulous and heathen see-sawing from his machine, kicking up a down home/back porch Henry Flyntian dust that guitarist/axe wielder Ryan Potter orchestrates with apocalyptic power chords and huge crunching rhythms." - Julian Cope